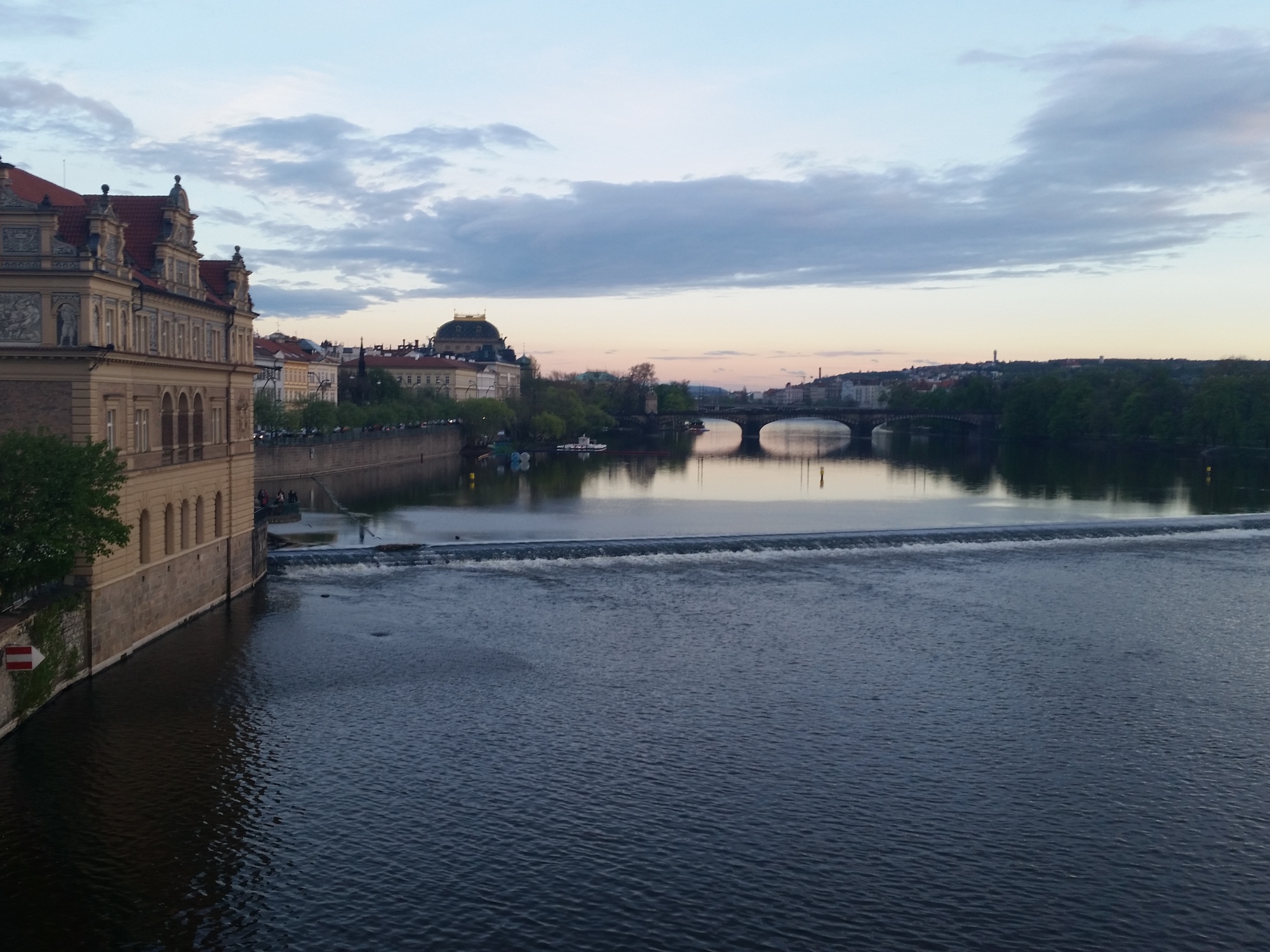 I visited Prague in April 2016, primarily to attend the BP16 Translation Conference, but also to do some sightseeing and relax. This is what happened…

Landing in Prague at 9pm on 13th April, I was very happy that I had booked an airport transfer to my overnight B&B as it was raining and I was wearing a pair of Converse. As I made my way through passport control, hoping that the scanners would recognise my passport this time, my smiling driver met me in the arrivals area. Once all passengers had arrived, the driver whisked my bag out of my hand, tossed me an umbrella and he was off, darting through the car park to find his car, as the rest of us ran to try and keep up with him.

When we got to my hotel, I found it ominous that all of the lights were off. This feeling was exacerbated when my driver hastily hauled my bag out of the back of his car, pointed to the gate that leads up to the hotel and said: “Good luck!”

Hauling my bag up the long flight of stairs, I hoped to God that the door to reception was open and that there would be somebody there. There wasn’t. In the dark and the rain, I rang the buzzers to the reception and office over and over hoping for a sign of life. Nothing. I then spotted the many notices on the door, one of which included a telephone number. I rang it to discover that the person on the end of the line was in bed and clearly wasn’t expecting me. After a short wait, the lights came on and he said: “Uh… you know reception closed four hours ago and you should have rang us to let us know you were coming.” I thought my response to their email a few weeks ago stating my arrival time would have been sufficient. Nope. “Oh, well the girl who was working here during the day saw that you didn’t arrive… so it was basically a matter of good luck,” he added. Err, OK… welcome to Prague?!

In the morning I was happy to be leaving this B&B and moving on to the conference hotel on the other side of the city. I asked the receptionist to book me a taxi and it arrived way ahead of the 45 minutes they advised over the phone. Taking a taxi in Prague is definitely worth it as the place is extremely beautiful. It was great to get a first impression of the city in daylight as we zoomed down the hill, over the bridge and into the thick of Prague city centre. Taxis in Prague are very affordable for a capital city. The fare came to just under CZK 300 (£8.70[1]), but don’t expect change from your driver. Mine certainly didn’t give any – or even pretend to offer.

Arriving at around 11am, I fully expected to be turned away from the hotel and told I was too early for check-in, which was officially at 2pm. Yet the lovely man at reception in the Don Giovanni Hotel was more than happy to sort me out a room then and there. I thanked him profusely and headed to my room to settle in.

I knew several colleagues attending this conference and one of them, Anne-Laure, just happened to be heading to the metro station at the same time as me. We established that we were heading in the same direction: she was off on one of the conference’s arranged tours while I decided to go for a wander around Prague Castle before the free walking tour that I had booked for 2pm. We bought our tickets (either CZK 24 (70p) for a single journey or CZK 110 (£3.20) for a 24-hour card, available at most metro stations and in some hotels) and I tried to get to grips with the metro map as we headed down the escalator. Still engrossed with which way we were going, how many stops, etc., my friend got on the waiting metro train just as the doors closed and I looked up, stunned, from my map. We waved goodbye to each other like star-crossed lovers and I was left alone on the platform to get the next train.

A friend of mine, James, had been to Prague before so I asked for some tips. When it came to the castle, he recommended getting off the metro at Malostranská and getting the tram up to Pražský hrad, which takes you to the back of the castle. This is a great tip as there’s a ticket office not far from this stop. I wanted to explore the castle, but I ended up just seeing the free parts for now as it was clear from the size of the place that I wasn’t going to manage everything within 90 minutes before leaving for Old Town Square for the Sandeman’s tour. So off I went, trying to peek my head around the doors of the bits I couldn’t see for free. There are some truly breath-taking vantage points of Prague from the castle, which is not surprising as it sits on top of a large hill overlooking the city.

After getting lost on my way to Old Town Square (I blame Google Maps, or more precisely my inability to use it), I finally found the meeting point outside the Cartier shop and Czech tourism office. The Sandeman’s tour guides are really easy to spot in their red T-shirts and umbrellas. Our tour guide was called Colin and he was from Scotland. He gave us a knowledgeable and entertaining three-hour tour as he regaled us with tales of the highlights of Prague’s history. He showed us around Old Town Square, Wenceslas Square and the Jewish Quarter and pointed out many of Prague’s delightful monuments, memorials and tourist attractions. He also taught us how not to get conned, with simple advice such as: “Do not exchange money on the street” to more savvy information, such as: “Select ‘No’ at the ATM if it asks you to accept the bank’s exchange rate. Your domestic bank will often give you a better deal.”

This tour included a 40-minute break in a touristy restaurant, but you are by no means obliged to buy anything, and our guide made this abundantly clear. Colin concluded the tour on the steps of the Prague Philharmonic Orchestra, with yet more larger-than-life tales of Prague (like the time someone shot at Czech President Vaclav Klaus with a replica gun). This tour is definitely worth your time and I highly recommend tipping your guide if you enjoyed it as much as I did.

That evening I met with colleagues and went to dinner at Restaurace Malostranská Beseda, a short walk from both the castle and Charles Bridge. It turns out that the service in Prague’s restaurants is usually speedy yet not always good. For instance, one of our party on this particular evening ordered a beer while the rest of us clearly took too long reading through the wine list. Our waiter was off like a flash, back a few minutes later with the beer and gone again before any of us could open our mouths. The food more than made up for this, though.

Afterwards, we went for a wander and strolled along Charles Bridge. It’s definitely worth seeing this bridge on a weekday evening as there are far fewer pedestrians around than during the day and at weekends. (Plus you can snap lovely shots of the sunset on the bridge!)

As part of the conference, we had the chance to go for a three-course dinner at the Municipal Hall (€69.00 or £54.00). This was the one fringe event I ultimately decided to book and I’m so glad I did. The hall was beautiful and it was a great opportunity to get dressed up and have a great evening. We had been asked to choose one of two set menus in advance, yet once again the service was a little odd and far too obsessed with speed. Rather than figuring out who had ordered which menu, the waiters and waitresses came out laden with several plates, which they placed in front of you whether you wanted that dish or not. I told them that I would prefer the other dessert option, only to be met with a very confused response!

The next day saw the end of the conference and me move into my third and final hotel for my last night. Given the experience with the first hotel, I was dreading it. Yet I was pleasantly surprised to find that my hotel was a four-star establishment (even if it was built into the football stadium) and that the room featured a kettle and a bath, two things that were sorely lacking in the Don Giovanni room.

I decided to return to the Castle today and see it properly. I took the tram all the way there and found that I preferred it to the metro. You get to see so much more scenery and figure out how to get from A to B more easily when you’re on a tram. Tickets to Prague Castle cost CZK 350 (£10.10) and include entrance to St. Vitus Cathedral, the Old Royal Palace, the Story of Prague Castle exhibition, St. George’s Basilica, the Golden Lane with the Daliborka Tower and the Powder Tower. The entrance fee is worth it for the Story of Prague Castle exhibition alone. This part of the castle showcases its history, with artefacts including the clothing of the noblemen who once lived in the castle. Expect to spend at least 4 hours here if you want to visit every part of the castle. If you’re not going as part of a tour, I recommend getting an audio guide from the ticket office. Unfortunately I arrived too late in the day and they had sold out, so get there early to avoid disappointment.

Arriving back at the hotel in the late afternoon, I noticed a message on Facebook from one of the conference attendees, Tatyana. She asked whether anybody was still around as she wanted to go to dinner at U Slovanské Lípy. I graciously invited myself along to the restaurant and had one of the best meals of my trip. Unfortunately, my evening ended with a bit of a bang (and not in a good way) as I was hit by a car when crossing the road outside the restaurant. I escaped with nothing but a couple of gnarly bruises, but that’s a story for another time…

Hannah is an experienced freelance translator (German-English and French-English) who specialises in the travel/tourism, business, and marketing sectors. She is also a travel blogger who writes about her experiences in the UK and abroad. View all posts by hannahtkeet